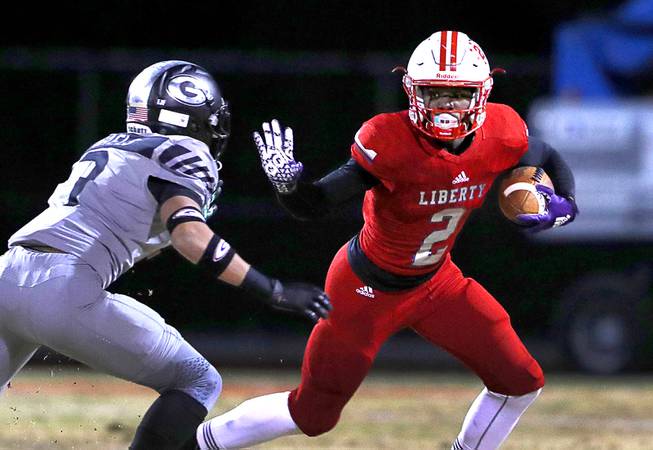 Liberty’s Germie Bernard (2) tries to fend off Bishop Gorman’s Donovan Smith (7) after a pass reception during the first half of Desert Region championship game at Liberty in Henderson Friday, Nov. 22, 2019.

The Patriots only gave up 17 points in five Southeast League games, winning each contest by the mercy rule of the running clock. In past seasons, as the Patriots won multiple regional titles in succession, they seemed to always run into a team or two along they way that presented a challenge.

The closest result was 38-0 against Foothill. And against Green Valley, the team that took second in the Southeast, Liberty rolled to a 59-0 win.

“We never took care of the division like that,” Muraco said. “We were taking care of teams right away. The games were over before halftime.”

The Las Vegas-area opponents in Liberty’s way, though, didn’t have a defense as accomplished as that of Centennial, the Patriots’ opponent in today’s class 4A state championship game. Centennial surrenders less than two touchdowns a game.

Centennial is the surprise participant in the title clash, going from a one-win season in 2017 to one victory away from the state’s biggest prize. This is the Centennial program’s first state game appearance in 20 years of existence; this is Liberty’s fourth championship game since 2012. The Patriots lost the other three, each to Bishop Gorman.

“We have a ton of respect for Liberty,” Centennial coach Dustin Forshee said. “They have a great culture over there. Liberty has been there before, but once the game starts, it’s just another high school game.”

Liberty, unlike in its past state games against Gorman, is considered the favorite. And while Centennial has just one defeat on the season and has played its best over the past two weeks, Forshee said it will take a perfect game to keep the score close.

“We need to do to Liberty what they did to Gorman,” Forshee said, referencing Liberty’s upset of Gorman in the Desert Regional championship game to break Gorman’s string of 10 straight state titles. “We feel good about it, but we know we need to be perfect.”

Check back later for game updates. Join the conversation on Twitter using #sunstandout.

‘When will it end?’: Vegas shooting featured in Eminem video calling for gun reform

‘When will it end?’: Vegas shooting featured in Eminem video calling for gun reform

Otzelberger sticking with Coleman at point guard: ‘We trust Marvin’

Sinaloa Cartel: Jose Torres Marrufo aka “Jaguar” appears to made a deal with the U.S.

CJNG: Pity Those We Catch Stealing or Extorting

US, China have long way to go to resolve trade friction: IMF chief