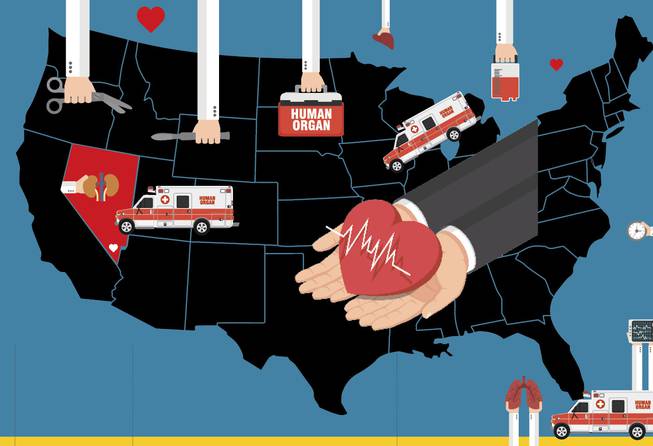 The United States has a kidney problem. More than 37 million Americans are afflicted with chronic kidney disease, according to the Centers for Disease Control and Prevention. Those on dialysis for five years have a survival rate of 35%, according to the School of Pharmacy and Medicine at the University of California San Francisco. And the Journal of the American Medical Association reports that 20% of kidneys donated are thrown away when matches aren’t found in time.

Historically, if you’ve been on the kidney waiting list in Nevada—which currently stands at 490 patients—you’ve been relatively lucky, with the average wait time between 18 months and three years, says Kelli Little, spokeswoman for Nevada Donor Network. That’s under the average national wait time, which can run up to five years, and well below wait times in states like California and New York, which can be up to 10 years.

Nevada has had one of the shortest wait times in the nation, Little says. “In 2018, Nevada Donor Network coordinated the recovery of 530 lifesaving organs from 130 organ donors, reaching an unparalleled 59 organ donors per million of population served.”

Other parts of the country aren’t as fortunate. In October, the Associated Press reported that some agencies secure the organs of deceased donors at half the rate of others, with some 8,000 Americans dying each year while waiting for a kidney. But that could change soon.

Widespread changes to organ transplantations have resulted in a new set of standards for organ procurement organizations (OPO).

There are 58 OPOs scattered throughout the United States, each acting as an organ matchmaker between transplant recipients and donors. (There are four OPOs serving Nevada, but the Nevada Donor Network is the only one based in the state.)

A new policy change approved last month by the Organ Procurement and Transportation board of directors has established new distribution areas based on donor location. The purpose of the change: to make transplant access more equal, regardless of where candidates live.

Previously, the rules prioritized kidneys donated within a region to stay within the region, in what were known as donation service areas. The new system sends more organs to underperforming areas like LA, which has a kidney waitlist time between five and 10 years.

That proposal could result in longer wait times in Nevada, however, says Dr. John Ham, medical director at University Medical Center’s Center for Transplantation. He also wonders whether longer travel times could degrade organs and ultimately disqualify them for donation. “The [new system] isn’t the right thing to do for a large segment of the population,” he says.

After much scrutiny from the public, the proposed distribution radius was reduced from 500 to 250 nautical miles, according to Anne Paschke, spokeswoman for the United Network for Organ Sharing.

“The local and regional boundaries we have used for decades often do not reflect the practical and clinical needs of transplant candidates based on how near or far they are to an organ donor,” says Dr. Maryl Johnson, president of the Organ Procurement and Transportation board of directors. “The new system is better at addressing distance as a factor in transplant matching. It’s also in keeping with our mandate to make sure that objective medical factors, not geography, should be the key to matching donors and recipients.”

But Ham worries that the 250-mile radius won’t benefit Nevadans, as cities including LA fall within that range. “We’re still going to be adversely affected,” he says. “The modeling data doesn’t look good for our patient population, because most of our organs will still get sent out.”

Most organs donated in Nevada are already transplanted out of state, because the state has just one transplant program, at University Medical Center, which performs only kidney transplants. “All other organs can still be donated here, but must be sent to transplant programs outside of our state,” NDN’s Little says.

Little says there might be a way to keep more organs in Nevada, however. “NDN [plans] to embark on an initiative through our foundation, which will allow the opportunity for more of the lifesaving organs heroically donated by Nevadans to stay here and save fellow Nevadans by establishing a transplant and research institute.”

Ham says looking at the way OPOs operate could also help solve the nationwide kidney shortage. “Maybe we need more OPOs for every couple million people,” he says. “Other things to look at it are governance and efficiency issues.”

Some of those issues were addressed over the summer when President Donald Trump signed an executive order to make it easier to track the processes of individual OPOs. One new standard will utilize federal death records to determine an OPO’s donation pool. The administration’s goal is to make the system more transparent and accountable while reducing barriers that discourage donors and provide incentives like covering expenses for lost wages.

The National Kidney Foundation has supported the administration’s latest changes, stating in a release that the rules reflect a lot of the organization’s proposed revisions to OPOs.

How organs are matched when a donor dies

Opting to become an organ donor is as simple as checking a box at the DMV, but determining where those organs end up decades later—and whether or not they’re even used—can often depend on where and how the potential donor dies.

When a patient dies, hospitals are required by law to alert their local organ procurement organization to determine whether or not the deceased’s organs are medically suitable for organ or tissue donation. Serious medical conditions like sepsis, pneumonia, hepatitis and even dementia can disqualify organs for donations. Only three in 1,000 people who die qualify as donors, according organdonor.gov, a government resource on organ donation and transplantation.

If a deceased patient is a donor, NDN will alert their family and loved ones of the process. If the patient isn’t a donor, NDN is required by state and federal law to ask the family’s consent to donate the organs. The decision to register as a donor is legally binding for anyone over the age of 18, but for those under 18, OPOs must obtain additional consent from a parent or guardian.

“After a patient is declared deceased, [NDN] assumes care of the donor,” the organization’s website states. “Our team conducts tests and maintains the donor’s body with fluids and medications to ensure the organs remain suitable for transplantation. Test results are submitted to the United Network for Organ Sharing database so a list of potential matching recipients can be generated.”

Once a match has been found, NDN contacts a local hospital to recover the organs, which are later transported to the hospital of the potential recipient to start the transplantation process. Little puts the time frame from recovery to transplant between four to six hours for organs like hearts and lungs, 12 to 18 hours for livers and 24 to 36 hours for kidneys.