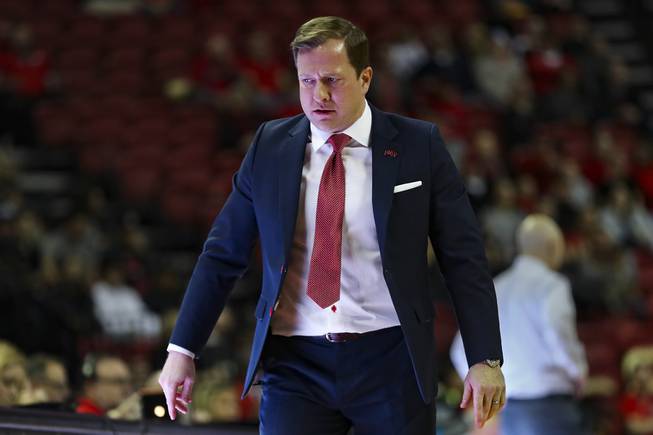 Coming off a disappointing missed opportunity at Boise State on Wednesday, the Runnin’ Rebels are right back on the road today as they’ll try to notch a win at Wyoming.

Let’s get ready for the game by answering some reader questions:

Are you surprised that the defense for UNLV seems to be really good and the offense struggles a bit? I think with the T.J. hire we thought there be more motion in offense and quicker shots into the shot clock. Any surprises here for you? I do think T.J. is doing good with the talent he has.

I have been surprised by how the team’s identity has changed. Throughout the offseason, it seemed like all the talk was about T.J. Otzelberger’s offense, but once he realized the Rebels didn’t quite possess the overall skill level to pull off it, he shifted gears and has gotten the team to buy into a defense-first mentality. That’s not easy to do, especially with a roster full of players who were expecting to run-and-gun all year. Regardless of the hot start to conference play or where UNLV ends up finishing, you’ve got to give Otzelberger credit for being flexible and adjusting on the fly.

What penalty should be given to anyone in the Las Vegas media market who doesn’t use “UNR” when referring to the other in-state university? (Seriously, they should be removed from whatever platform they are on.)

As a non-native Nevadan with no stake in the fight, I simply follow the Las Vegas Sun’s internal style by referring to “UNR.” I wouldn’t denigrate any other outlet for calling it Nevada or UNR or whatever. I know this ticks off Reno-area media every year, but it’s a non-issue to me. That being said, I do enjoy a good media feud, so I give the fans my blessing to torch writers for their usage of “UNR/Nevada.”

How was the ice-cream sundae baked potato?? Also, will we win Saturday?

There’s a diner in Boise that makes an ice-cream sundae presented to look like a baked potato, and once you get past the sight of it, it’s actually pretty good (if you like vanilla ice cream as much as I do). As for UNLV’s chances today at Wyoming, I’ve got to think they’ll be able to take care of the Cowboys, who look especially bad this year (5-12, 0-5 Mountain West). It’s not often that conference road games are gimmes, but this one is. The Rebels have to take advantage.

Talk to me about why the staff isn’t interested in pursuing 4- or 5-star recruits? I know the ratings are somewhat arbitrary but let’s go.

It’s not that the staff doesn’t want to go after talented players — their top target in 2021 is 4-star Bishop Gorman guard Zaon Collins and their headline commit in 2020 is top-100 guard Nick Blake — but I think they’re limiting themselves to the players they think they have a chance of getting. If Otzelberger can turn UNLV into a winning program with yearly NCAA Tournament runs, you’ll see higher-ranked recruits wanting to join the train and the staff will recruit them vigorously. For now, the coaches seem to be focusing on gettable players with upside who fit the system.

What are you more optimistic about, the future of men’s basketball or football?

At UNLV, the answer to this question is always going to be men’s basketball. It’s just a hoops town. The fan base is deeper and the Runnin’ Rebels program still has some national cachet; football is way behind in that regard.

And it’s just easier to turn around a basketball program. It only takes one good coach and one good recruiting class — maybe even just one or two players — to turn a bottom dweller into a March Madness qualifier. T.J. Otzelberger could realistically have the Rebels in the tourney next year. Football, however, requires a bunch of good coaches on the staff and at least 30 or 40 good players spread over multiple recruiting classes. It’s a longer process, and given the football program’s inherent disadvantages — fewer fans, bad facilities (until now), thin recruiting base, etc. — it’s more likely the basketball program returns to glory before the football team starts winning double-digit games.

Crystal ball: Who’s staying/going for the 2020-21 season with all the signees and lack of schollies to offer?

UNLV currently has seven recruits coming in the Class of 2020 and only three seniors set to graduate, so obviously there is some math that needs to be done to make the 2020-21 roster work.

Elijah Mitrou-Long, Vitaliy Shibel and Nick Blair will graduate, giving UNLV three open scholarships. Donnie Tillman declaring for the NBA would open up a fourth; that means the Rebels will need three players to transfer, either by choice or by force, in order to accommodate the incoming recruits.

I’m not going to speculate here as to which players are going to get swept out the door, but I will say that a month ago, Marvin Coleman would have been on that list. But the sophomore has been a revelation since taking over for the injured Mitrou-Long, and no matter how the math works out in the offseason, I expect Coleman to have a secure spot waiting for him.

Where does prime rib fall within your cut of meat rankings?

I’ve never had prime rib, so I’m not qualified to answer that question. But in other meat-related news, I had barbecue ribs on Friday and I enjoyed it. I’ve now had ribs a handful of times since trying it for the first time (in Memphis, when I traveled to cover UNLV football at Arkansas State) and I can now say it’s part of my food repertoire. For a picky eater like me, that’s a big deal.

Should we concerned that Coach Arroyo has hired 8 position coaches & has a limited budget left to hire the 2 most important coaches, the Offensive & defensive coordinators?

The defensive coordinator, however, is definitely going to be a vital cog in the coaching staff. If the Rebels are going to spend anywhere, it should be at that spot. I believe Desiree Reed-Francois when she says there is going to be money available to pay the assistants the going rate for the top of the Mountain West conference. If I were a fan, I wouldn’t freak out or worry about the hire until after we find out who the DC is going to be.