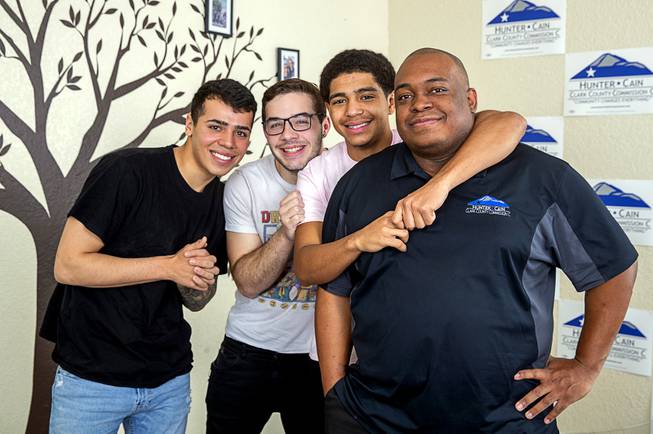 Hunter Cain, a candidate for Clark County Commission, District C, poses with his sons in his home Saturday, Jan. 4, 2020. Sons, from left, are Takota Nelson, 19, James Cain, 18, and Julien Cain, 17. The seat is currently held by Commissioner Larry Brown but he is barred by term limits from running again. 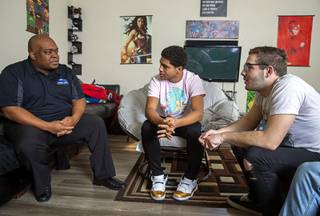 To some of the youths who pass through the foster care system, Hunter Cain’s central Las Vegas home is a welcome surprise. With wide-open rooms and walls decorated with superhero posters and “Game of Thrones” tapestries, it’s affectionately called “House of Cain” by him and his family, and it has become a refuge for the despondent young men who come into Cain’s care.

Cain never imagined that someone — much less an older teen with tattoos and facial hair — would ever call him “dad.” When Cain turned 32, however, he started to become aware of his mortality and wondered what sort of legacy he wanted to leave behind. Now, several foster kids and two adopted sons later, the 38-year-old says “dad” is a moniker and responsibility he’s learned to embrace as he helps his sons in their transition from boys to men.

“I think when people look at the older youths in the system, they think their lives are too chaotic to have any influence on them,” he says. “That’s not my mentality at all.”

Now Cain wants to take his ethos as a foster parent to the Clark County Commission as the District C representative. Termed-out Commissioner Larry Brown will leave office at the end of the year.

If elected, Cain would be the first African American to represent District C. Openly bisexual, Cain would also be the first open LGBTQ member on the commission. These intersections of identity are important to Cain, who said he was partly inspired to run for office by Congressman Steven Horsford, D-Nev., a representative who “looked like me.”

“Everyone always talks about how powerful the commission is,” Cain said. “I want people to know it’s not only a powerful body, it’s also a diverse one. You can be LGBTQ and run here, you can be a single parent, you can have and do other things and still run for this position.”

Cain said he became interested in politics and outreach while working for U.S. Rep. Dina Titus, D-Nev., as her director of community outreach.

Cain references a phrase he said was coined by Brown himself that District C “is the Disneyland of Clark County.” Meaning, it’s an easy district, with lots of open parks and spaces and not a lot of issues. Still, Cain said there was a lot of work to be done toward underserved social programs.

Cain says he wants more work done at the county level to strengthen not only Southern Nevada’s foster care system, but other social services for veterans and homeless individuals, all areas that he feels extremely close to as a former homeless veteran and a single foster parent.

“There isn’t anyone on the commission close enough to these issues,” he said. “Although they may care, or have worked around these issues, no one is as engrossed in them as I am.”

Cain has experienced firsthand some of the shortcomings that lie within the Clark County Department of Family Services. Many of the youths who pass through his care are disillusioned with the system by the time they come into Cain’s home.

Julien Cain for example, whom Cain adopted last year, said his previous foster families used to “play hot potato” with him, which made him lose any hope of finding a long-term “forever home.”

The 17-year-old said his former foster parents were also cold toward him, with little physical contact or warmth. His new father was different though.

“We never go to sleep angry at each other,” he said. “He approaches the foster care world differently.”

Julien said he always hated his middle name, so when his adoption was finalized, he changed his middle name to Tyrion, after the beloved “Game of Thrones” character over whom he and his new father first bonded.

James Cain was skeptical when he first met his newly adopted father. As a rowdy 16-year-old with past behavioral problems, he knew the statistics weren’t in his favor. He never thought anyone would want to adopt him. Still, there was something about Cain that made him feel like he could trust him.

“When I moved in, it was different from any other home I’d been through,” James Cain said. “It wasn’t just, ‘Hey, this is where you will be sleeping.’ It was, ‘This is your room.’ It wasn’t, ‘Hey, don’t put anything on those walls.’ It was, ‘Hey, do you have posters you want to hang up? Do you want to paint the room? You want a new bed or new furniture?’ It was inviting to an extent I wasn’t prepared for. I’ve never walked into a home where it felt like it was home.”

Cain said he didn’t realize at the time that his approach to foster care was unusual. He grew up in a large family, so keeping a welcome home was something he always valued. He said the classes he took initially with the Department of Family Services instructed him to keep a distance from his foster kids.

Now Cain works with SAFY of Nevada, which like him, encourages foster families to treat the kids that come through the system like family.

“These aren’t just random kids to me, they’re all my sons,” he said.

For Takota Nelson, Cain is more of a mentor figure than father. At 19, he’s aged out of the foster care system and, in his view, a need for a father. So Cain has helped guide him through high school, relationships and even the Army.

“Hunter is definitely a lot more caring than my past foster families,” Nelson said. “A lot of foster parents tend to think in the present, but not Hunter, he’s thinking about the future. Like trying to get me a laptop for college, or preparing me for job interviews or other advice.”

Cain also sees the value in keeping his sons in contact with their birth families. Daniel Lieberman, for example, said he was taken abruptly from his birth family when he was 16 and other foster families wouldn’t let him connect with them. Now, he gets to see his mother once a week.

“This experience has taught me to be honest,” he said. “Family isn’t always by blood, it’s the people who care about you.”

While the official candidate filing period for Clark County Commission doesn’t begin until March 2,  others who have expressed interest in running for District C include Las Vegas City Councilman Stavros Anthony, former Nevada Secretary of State Ross Miller and Fayyaz Raja, who is a member of the Clark County Asian-American Pacific Islanders Community Commission.