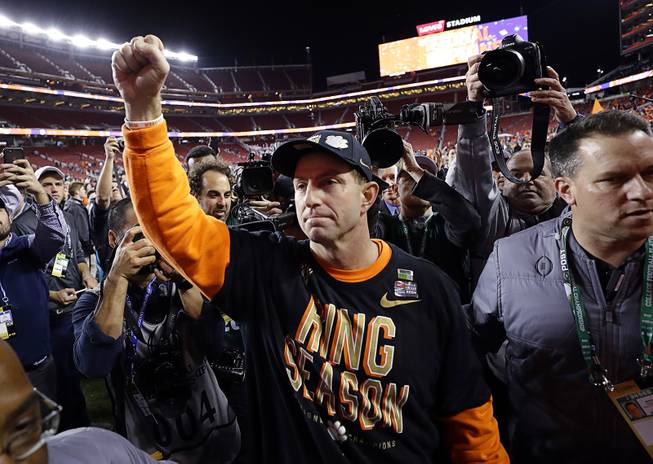 Those were my big futures positions this season and they’ve all been wiped out one-by-one in a de facto tournament dating back to conference championship weekend by the two teams playing for the national championship tonight. I’ve tried to fade Clemson and LSU all year long, and all year long, I’ve been wrong.

That makes me more than a little cautious going into this game. I haven’t possessed a good read on these teams all year; why would I expect it to change now?

Everyone wants to finish strong, however, and I’d be remiss if I didn’t offer a disclaimer saying that recent history has me second-guessing if that’s likely in this game.

Read below for the final college football pick of the year.

College Football National Championship at 5 p.m. Monday in New Orleans: Clemson plus-5.5 vs. LSU, over/under: 69. When you write picks for 770 college-football games over the span of four months, even if you try to avoid it as much possible, you tend to repeat a few ideas. In the running for my most overstated thought in the column this year is, “The betting market struggles to properly price outliers.” I’ve often relied on some version of that sentence when picking college football’s very best teams. But what do you do when a game presents two all-time outliers?

The national championship may very well present a pairing of two all-time outliers. Clemson came into the season at the top of the market with everyone looking to bet it and still wound up as the most profitable team in the country. Similarly, LSU’s high-powered offense made it the du-jour bet-on team at the end of the year and the bloated spreads haven’t bothered the Tigers. They’ve arguably played their three best games down the stretch in covering easily in blowouts over Texas A&M, Georgia and Oklahoma.

So forget about the matchups. As it most often does in this column, this comes down to a numbers game. And the numbers do seem slightly off in this matchup. I made the spread LSU minus-3, exactly where it opened but sat for only seconds before action steamed in against Clemson. I can’t disparage the early LSU backers though. Offense tends to win out over defense in the long run. LSU probably even deserves a slight boost for getting to play a semi-home game in the Superdome. Keeping all this in mind, I decided I wouldn’t consider betting the game unless Clemson reached plus-6 — the next key-number higher than where I thought the spread should be.

It got there last Friday, and I failed to act. There was finally some signs of market resistance at 6, and now there’s no price higher than 5.5 left in Las Vegas. Maybe it moves up again, and then Clemson is a slightly easier take. But it might more likely that this spread keeps falling because no set of analytics supports LSU being this large of a favorite. Not even if you isolate for this season alone without factoring in Clemson’s prior success, which deserves some weight.

All season, these picks have been more numbers- than feel-based, and after a strong overall year, it would be foolish to stop now. Maybe LSU rolls and reveals itself as the truest outlier but there’s no evidence that Clemson will be outmatched or turtle up because of adversity. And there’s no reason to close the season by paying an inflated price.