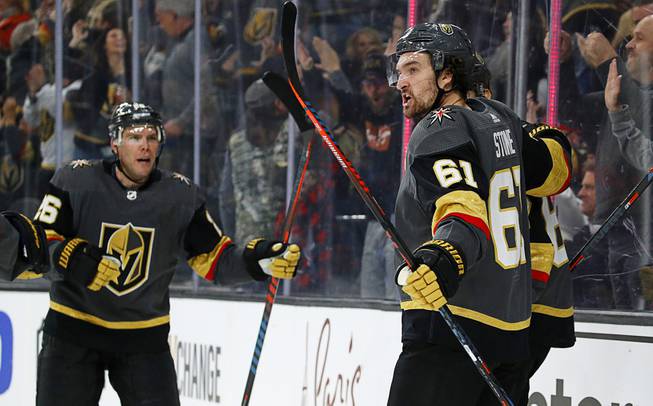 Gerard Gallant was pretty clear about how he feels regarding the Golden Knights’ just-ended homestand that spanned a season-long seven games.

“I love being home for a week — seven, eight days — but when you’re home for two weeks, two and a half weeks, it’s too long,” the Vegas coach said. “We’ve been home too long. Let’s get going. It just feels like almost the summertime. It’s not right.”

It seems like an advantage, getting to play more games at home. But the Golden Knights, who tonight play on the road for the first time since Dec. 27, are creatures of habit like any hockey players. They’re used to never being in one city for longer than a week or so. And when they finished their homestand with a three-game losing streak, it begged the question if the Golden Knights just needed to get away.

“Seven games at home is tough. Seven-game homestands, I think if you look around the league, I don’t think teams do overly well on them,” forward Mark Stone said. “Sometimes when you’re at home, you kind of take it for granted a bit, you know what I mean? Just when we’re playing here, we’re just a little bit too comfortable, so I think getting on the road will be a big help for us.”

Stone’s comment was worth diving into. Including Vegas’ 4-3 stretch at home, there have been five completed homestands of seven games or longer with two still go. Vegas, Carolina and Florida had winning home stands, and Anaheim and San Jose had losing ones.

The correlation is that the good teams won their games at home and the bad teams lost theirs, which isn’t exactly breaking news. There isn’t necessarily statistical evidence to back up that teams perform poorly at the end of a long homestand (and admittedly there are only five data sets this year), but that doesn’t mean it’s not true.

Players like their habits, and sometimes getting on a plane and going to a place where there is nothing to do but concentrate on hockey is a good thing.

“It’s a lot easier to be laser-focused because you don’t have anything else going on besides seeing the guys every day,” defenseman Nate Schmidt said. “So that part is definitely something I enjoy.

“A month on the road is a little bit aggressive,” he added with a smirk.

If it’s a road trip the Golden Knights want, it’s the longest road trip in franchise history they’ll get. Not only are the eight games on the road the most the team has had consecutively, sandwiched between two sets of four games is the All-Star break and bye week. Vegas runs through the northeast part of the continent, then has 10 days off before a four-game swing through the Southeast. The Golden Knights don’t play at home against until Feb. 8, making it 27 days between Saturday’s game against Columbus and their next home game.

In a vacuum, most teams would rather play at home. Vegas has a slightly better home record than road this year (14-10-3 vs. 10-8-3), and T-Mobile Arena has provided one of the best home-ice advantages in hockey over the last three seasons. There’s the comfort of sleeping in your own bed every night, which many will happily take.

“I don’t hate it, to be home with my family for this long, it’s definitely nice,” defenseman Jon Merrill said. “I understand where (Gallant) is coming from. You kind of get stagnant a little bit and you get a little comfortable. It’s nice to get on the road. When you’re on the road it’s all business and at home there’s a little bit more distraction and things like that.”

Vegas draws Buffalo, Ottawa and Montreal — the respective 12th-, 15th- and 13th-ranked teams in the 16-team Eastern Conference — before a date with the powerhouse Bruins on the last game before the break. It’s never easy going to the East Coast, but in a Pacific Division with a razor-thin margin for error, picking up some standings points would go a long way in erasing the missteps of the last home stand.

The Golden Knights will play their first road game of 2020 tonight in Buffalo, which could be just what they need to get back on track.