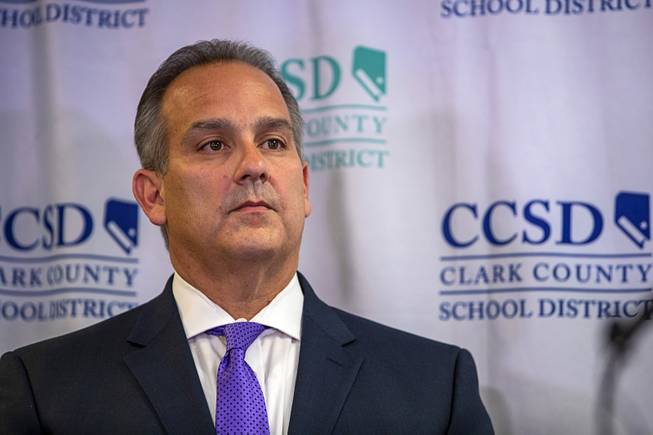 Clark County Schools Superintendent Jesus Jara, shown at a news conference at district offices Aug. 28, 2019, has said that the shift away from deans is part of a larger philosophy that reduces punitive approaches to discipline.

The Clark County School District is phasing out deans, with just 45 deans remaining across all middle and high schools as of early December compared with 143 deans in May.

The phaseout began this summer, with many principals opting to cut dean positions to balance their budgets or promoting their deans to an assistant principal position, said Tam Larnerd, principal of Spring Valley High. While the shift was Superintendent Jesus Jara’s idea, secondary school principals also took part in conversations about the change, said Stephen Augspurger, the Clark County Association of School Administrators president.

“Principals agreed that the elimination of dean positions would be best,” Augspurger said.

Jara initially announced in June that he would cut all dean positions at the start of the 2019-2020 school year as a cost-saving measure. But the proposal faced extensive criticism, especially from principals and the administrators’ union, leading Jara to rescind his plan a month later.

Instead, Jara gave principals the option to reduce costs through other measures, although some opted to eliminate their dean positions anyway and conversations continued about the future of the position in the ensuing months, Augspurger said.

Through those conversations, many principals warmed up to the idea of replacing deans with either an additional assistant principal or through new positions, such as student success coordinators or teachers on special assignment, said John Anzalone, principal of Sierra Vista High.

Jara has communicated that the shift away from deans is part of a larger philosophy embracing restorative justice and reducing punitive approaches to discipline, Anzalone said.

“I can only speak for myself, but I’m seeing the bigger picture as to why Dr. Jara made this decision,” he said.

Deans oversee a range of administrative and supportive tasks at middle and high schools, including discipline, conflict resolution and extracurricular activities. The 10-month position is intended to serve as a bridge between teaching and administration, but according to multiple principals interviewed, deans are often too overwhelmed with disciplinary needs to regularly practice other administrative skills.

“(Jara) was a little disappointed that the role through the years has really, strictly been a disciplinary role, so there’s been very little as far as grooming them or developing them to be instructional leaders,” said Derek Bellow, principal at Liberty High.

While most deans go on to become assistant principals within a few years, some were staying in the position for as long as 15 years, implying it wasn’t working as a bridge to principalship, Larnerd said. That contributed to the decision to gradually eliminate the position as well.

“Some of them were just good people who loved their job, liked working 10 months (annually), had no aspiration to become principals and were just chugging along,” Larnerd said.

Jara and other top district officials declined to answer specific questions, but a district spokesperson confirmed that remaining deans were notified via a Nov. 9 memorandum that their positions would no longer be available in the 2020-2021 school year. They have the option of applying to be an assistant principal, and if they have not secured that or another administrative position by the end of their contract, they will be offered a teaching position, according to the memorandum.

As of the beginning of December, there were 327 secondary assistant principals districtwide, 86 more than there were last May, suggesting that many have already secured a promotion through the changes. Nonetheless, confusion remains for some current and former deans who feel the path forward for them and for disciplinary issues is unclear.

Tracy Pacheco was elevated from dean to assistant principal at Von Tobel Middle School during the uncertainty last summer. Her responsibilities, though, have remained mostly the same, specifically with the focus on discipline. She indicated that some at the school are confused as to who will handle those responsibilities moving forward without a dean in place.

“It’s definitely different,” Pacheco said. “We do what we can and do the best that we can.”

Newel Matavao, dean of students at Liberty, said he is grateful that his boss, Bellow, decided to keep his position through the end of the school year. Nonetheless, he doesn’t support the districtwide elimination of deans, as he worries that discipline and attendance, the main issues most deans handle, could be compromised.

“It’s just such an important position,” said Matavao, who has applied to be an assistant principal next year.

Augspurger dismissed that concern, noting that deans and assistant principals have overlapping duties under their job descriptions and that both can handle disciplinary tasks. The biggest challenge moving forward, he said, will be determining how to provide additional training opportunities for assistant principals who didn’t have the benefit of being a dean beforehand.

“It’s incumbent on the district to provide more training for those teachers,” he said.

Sierra Vista appears to be addressing that problem already. Replacing two former deans who were promoted to assistant principal positions at different Clark County schools, two teachers have received a “special assignment” to oversee disciplinary issues this year, Anzalone said. Both of those teachers were selected for their “potential and vision” and have embodied Jara’s new disciplinary philosophy more than deans did, he said.

Meanwhile, some principals have chosen to create new assistant principal positions primarily focused on discipline to replace deans, while other have simply shifted disciplinary needs onto assistant principals, Bellow said. The district also created a new discipline-focused position called student success coordinator, but principals interviewed weren’t sure if anyone is currently serving that role.

Compared to Jara’s initial decision to unilaterally eliminate deans in June, the gradual phaseout of the position seems to have gained support from administrators, so long as potential issues are ironed out in the coming months, Anzalone said.

Principals hope that the new philosophy and disciplinary direction will become even clearer in the coming days, as 2020-2021 school budgets are expected to be released this week. Even Augspurger, whose union was extremely critical of Jara’s decision to cut dean positions in June, said the new system seems to be going smoothly.

“I think principals, working with their school teams, are finding ways to make this work,” Augspurger said.