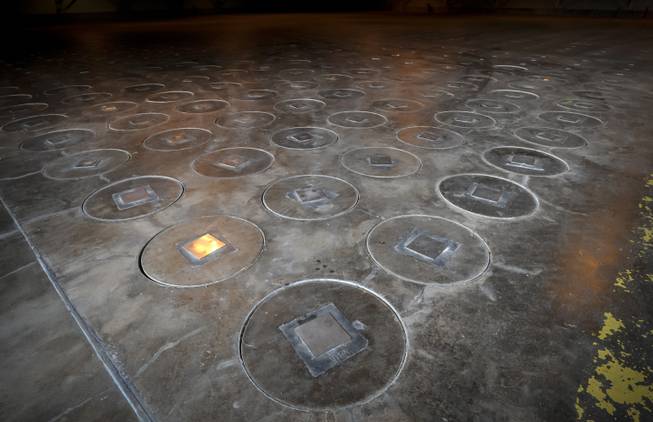 In this Nov. 20, 2013, file photo, radioactive waste sealed in large stainless steel canisters is stored under five feet of concrete in a storage building at the Savannah River Site near Aiken, S.C.

RENO — The state of Nevada continues to intentionally misrepresent the facts in an ongoing legal battle over the Energy Department’s secret shipment of weapons-grade plutonium to a site near Las Vegas, U.S. government lawyers say in new court filings.

Nevada wants a federal judge to order removal of the highly radioactive material and issue an order prohibiting any new shipments. It says the plutonium was illegally trucked to the Nevada security site over the state’s objections last year after the agency refused to conduct the necessary environmental reviews on potential impacts.

The Energy Department has promised no more plutonium will be shipped to Nevada from South Carolina and pledged to start moving out the materials already sent there.

Department lawyers said in support of their latest motion to dismiss the lawsuit last week that Nevada continues to ignore relevant case law, misconstrues past rulings and “significantly misstates contents of agency testimony in a related case in a futile attempt” to support its claims.

“Throughout these proceedings, Nevada has relentlessly misrepresented the federal government’s actions, complaining now, incredibly of a ‘secret plutonium smuggling operation,’ and characterizing the Department of Energy as a ‘federal agency gone rogue,'” they wrote.

They said the U.S. court in Nevada already concluded there was no proof of imminent danger to public health or the environment.

The 9th Circuit Court of Appeals last spring upheld a judge’s ruling that the question was moot because the plutonium already was in Nevada. The San Francisco-based appellate court refused to consider the request to order removal because the state hadn’t sought such relief in its original lawsuit filed more than a year ago.

A judge in Reno agreed in October to allow the state to amend its lawsuit to include that request and the U.S. promptly filed a motion to dismiss the new complaint.

Nevada says the government repeatedly has refused to provide classified details it needs to further characterize the risks.

Lawyers for both sides told a U.S. magistrate on Friday they’ve agreed on a process to determine what if any additional information the department will provide to the state — some of it previously top secret — while a judge considers the motion to dismiss the case.

The government says in its latest filing on Friday one of Nevada’s biggest misrepresentations centers on the department’s plans for the future location and use of the plutonium in question.

Nevada says the department has reversed its position since it argued in a legal battle with the state of South Carolina in 2017 that it was impossible to complete a full-blown environmental impact statement on the potential harm of prematurely removing the plutonium from the Savannah River site without posing a significant risk.

The government says that outdated position referenced the risk posed by its original intention for the surplus plutonium to be diluted into radioactive waste before it was transported.

Instead, so as to comply with a court order that it be moved from South Carolina before 2025, it says it adopted an alternative plan to ship the material to Nevada in a different, solid metal form to be used to make future nuclear weapons at another department site, most likely New Mexico, the government says.

“The ‘risk’ referred to is from packaging for transportation and not from storage in Nevada,” the new filing said.