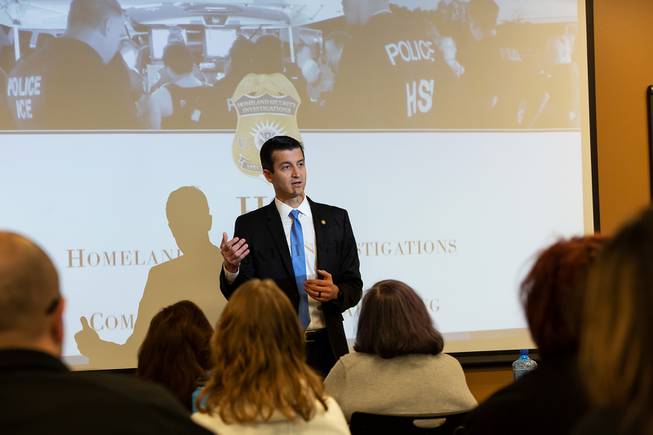 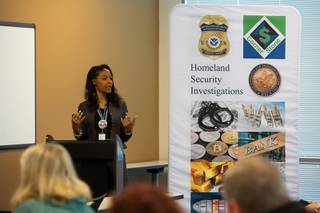 In the crusade to eradicate human trafficking, awareness is golden.

And in Las Vegas in recent years, a more informed public has translated to more arrests, prosecutions and victims rescued from the affliction of this modern-day slavery, said Nicholas Trutanich, U.S. attorney for the district of Nevada.

Human trafficking is a $150-billion-a-year industry that affects about 20 million victims, with most of its earnings originating from sexual exploitation. January is National Slavery and Human Trafficking Prevention Month.

Trutanich’s message was directed to a couple of dozen attendees gathered Wednesday at Metro Police headquarters for a two-hour training session.

Attendees heard from Homeland Security Investigations, whose officials dove into the differences between human trafficking and human smuggling: trafficked victims don’t come to the United States voluntarily, although smuggled persons sometimes are kidnapped and exploited.

Both industries, however, are lucrative, illicit and part of organized criminal networks. Trafficking victims are not always prostituted, HSI Special Agent Jeffery Reza said. He remembers a California case in which a wealthy family was exploiting domestic workers, paying them a couple of dollars an hour even when they had millions of dollars to their name.

In 2018, HSI pursued 849 human trafficking investigations, made 1,588 arrests, which led to 538 convictions and 308 victims identified, according to a slide presented by Reza. On Wednesday, the Department of Homeland Security released a report outlining its five-year strategy to combat human trafficking, which it deems a growing problem.

Trutanich touted the Dec. 31 indictment of Jacques Anton Lanier — who also used the alias John Dupree. Prosecutors allege the suspect coerced eight underage girls, forcing some of the victims into prostitution. He said his office would also be aggressively prosecuting not just the traffickers, but also those who make the business profitable.

Attendees also heard from Charletta Zamora-Cruz, an HSI victim assistance specialist, who spoke about best methods to humanely and sensitively approach victims, who’ve been through so much. Neither of them ever dreamed of being sex workers, she said. Mike Crabtree, a representative with U.S. Citizenship and Immigration Services, spoke about different visas available to victims of crimes, and how to apply for them.

Wednesday’s class was part of a continuing collaboration between authorities and its community partners. Next week, officials will meet with those advocates who couldn’t make it to this class, said Trisha Young, spokeswoman with the U.S. attorney’s office.

These partnerships are crucial because not one entity could combat human trafficking alone, said Elynne Greene, manager with Metro’s victim services and human trafficking special victims unit, who attended the training.

If there are outreach and education opportunities, the persons learning can spread that information, Greene said. “It’s just about awareness.”