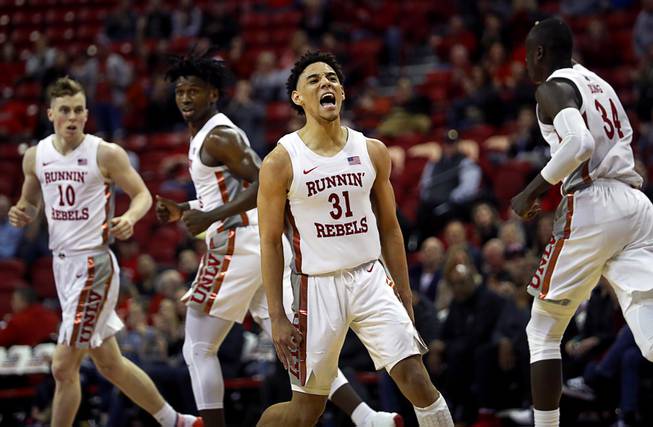 Marvin Coleman has been a revelation while filling in as UNLV’s starting point guard over the last month. On Friday, coach T.J. Otzelberger made the arrangement a little more official.

Otzelberger met with the media after Friday’s practice and said that Coleman, a former walk-on from Foothill High School, will remain the Rebels’ starter even when previous point guard Elijah Mitrou-Long returns from injury (which should happen sometime around the end of January).

Otzelberger praised Coleman’s contributions since taking over the starting job, especially his leadership.

“He’s a tremendous young man,” Otzelberger said. “A leader, a winner, loves UNLV. Great teammate. His intangibles are huge and what he brings to our ballclub is phenomenal every night. It’s far beyond the stat sheet, for sure.”

Coleman has been pretty good on the stat sheet as well. In the last three games, the sophomore is averaging 14.3 points, 3.7 assists and 2.3 steals per game. He has shot the ball accurately from every level during that stretch, making 52.9 percent from the field, 41.7 percent from 3-point range and 87.0 percent from the free-throw line.

Coleman said his on-court productivity has increased in conjunction with his comfort level.

When asked about being named the starting point guard, Coleman admitted it was nice to receive a vote of confidence from his coach but said it won’t affect his approach.

“It makes me feel pretty good, but I’m still going to do everything I can to make our team win,” Coleman said. “If Elijah comes back and he can help us win and I’m playing as well, that’s going to be a big plus for us. We need guys to come in with a lot of energy and help us win.”

Mitrou-Long came to UNLV as a grad transfer from Texas and was the opening night starter at point guard. He averaged 12.9 points through the first nine games, and he exploded for 29 points in UNLV’s overtime loss at Cincinnati on Nov. 30. Unfortunately for Mitrou-Long, he suffered a broken hand in an ensuing practice and has not played since.

Though the starting job won’t be waiting for him when he returns, Mitrou-Long still figures to play a sizable role down the stretch. UNLV needs backcourt depth, and Mitrou-Long’s ability to shoot from deep (36.8 percent from 3-point range) will make him a key contributor.

Otzelberger believes Mitrou-Long will buy into his new role.

“[I will] talk to Elijah, explain to him how the team has changed, how the season has changed, that Marvin has earned the starting point guard position,” Otzelberger said. “There’s a lot of valuable things [Mitrou-Long] can do to help our team win. He shoots the ball really well from the perimeter, he’s a good playmaker, he’s a good on-ball defender, so we could use all those attributes to help our team. But at this point Marvin has earned that spot and we trust Marvin as the point guard.”

“Elijah is a mature young man,” he continued. “I’ve known him a long time. I think he can see how the dynamics of our team are changed since he’s played, and I think he’ll be excited to embrace his role.”

Coleman has started the last eight games and the Rebels have gone 6-2 in those contests, including a 5-1 start to Mountain West play. The current starting lineup is rolling, and by committing to his sparkplug point guard, it appears Otzelberger is going to roll with that group — with Coleman leading the way.