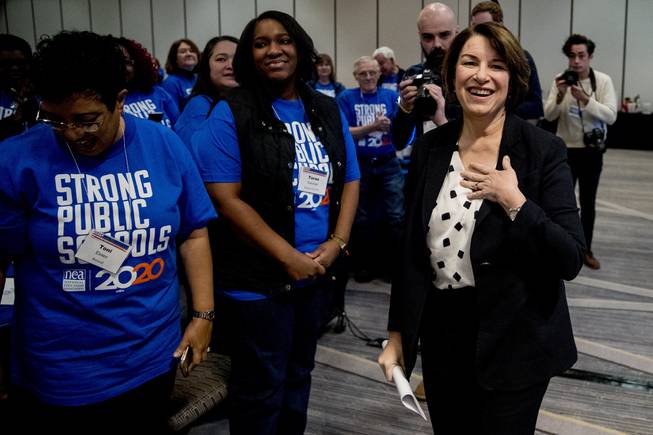 NEWTON, Iowa — As a winter storm barreled down on Iowa, Elizabeth Warren’s campaign team struggled with whether to scrap a town hall scheduled at the old Maytag headquarters.

There was more than weather at play as the Massachusetts senator’s campaign monitored the forecast and called expected attendees to gauge their willingness to brave the snow and whipping wind. For the Democratic presidential candidate, the event was probably one of her last chances to make a face-to-face appeal to voters in Iowa before the Feb. 3 caucus. So it went on as planned.

Warren, along with Sens. Bernie Sanders of Vermont and Amy Klobuchar of Minnesota, is soon to be marooned in the Senate as a juror in President Donald Trump’s impeachment trial. With the trial schedule up in the air, this weekend is likely the final full weekend of campaigning for those candidates before the kick-off caucus.

That’s left their campaigns scrambling to make the most of their time in Iowa and the other early-voting states, and thinking of ways to stay on voters’ radars during the trial in Washington. It’s also given their 2020 rivals outside the Senate an opportunity to take advantage.

Klobuchar trails the top tier of contenders in polling and fundraising and needs a strong showing in Iowa to catapult her campaign into the next round of primaries. She insisted that the demands of the Senate trial wouldn’t hurt her candidacy.

“I’m a mom and I can balance things really well,” Klobuchar said during an event Saturday in Coralville.

But privately, the collision of the trial and the caucus has created anxiety among campaign advisers who face the prospect of their bosses being trapped in the Senate as silent jurors just as voters in Iowa are taking a final look at the candidates.

The full schedule for the Senate trial is uncertain, and it’s possible it wraps up before the caucuses. But campaigns are planning for the prospect of the candidates being in Senate session Tuesday through Saturday next week, as well as five or six days the following week. The fourth Democratic senator still in the race is Michael Bennet of Colorado.

Well-funded candidates such as Warren and Sanders are considering putting private planes on hold in Washington so they can quickly fly to Iowa for late-night events after the trial wraps up. Sanders has already scheduled an 8 p.m. rally in Cedar Rapids on Wednesday, taking advantage of the one-hour time difference between Washington and Iowa.

Campaign surrogates are planning to headline events during the week that the candidates can appear at via livestream video. Warren’s team has Reps. Ayanna Pressley of Massachusetts and Katie Porter of California on standby, as well as Julian Castro, the former Obama housing secretary who dropped out of the presidential race this month. Sanders’ wife, Jane Sanders, will headline an event in Las Vegas next weekend and will introduce her husband, who will participate by video.

Still, the Senate schedule has increased the pressure on the candidates to make the most of what may be their last free weekend. Warren had three events scheduled Saturday with influential interest groups. Klobuchar was headlining three town halls in eastern Iowa. Sanders was campaigning in New Hampshire, the next state on the primary calendar, before heading back to Iowa on Monday.

“I wish I could be back in New Hampshire and Iowa, but I will be in Washington doing my constitutional duty,” Sanders told voters during an event Saturday in Portsmouth, New Hampshire.

The Senate trial has added a layer of uncertainty to the political climate in Iowa, where the Democratic race remains exceedingly close. Recent polls show Warren, Sanders, former Vice President Joe Biden and Pete Buttigieg the former mayor of South Bend, Indiana, in a virtual tie, with Klobuchar trailing behind.

Biden has events scheduled in Iowa four out of the next five days. Buttigieg plans to be in the state nearly every day until the caucuses, focusing in particular on smaller Iowa cities and towns less often seen by his top rivals.

Last week, Buttigieg traveled across northwest Iowa, where Republicans outnumber Democrats but where the minority party still has active county party organizations. In sub-zero weather, he drew 100 people in Algona, population about 5,400. It was his second visit to the town, one where no other candidate polling above 1 percent has campaigned.

On Thursday, he met about as many in Emmetsburg, where only Biden had visited before, and twice as many in Arnold’s Park, a popular summertime lake-area vacation spot, where only Sanders had previously stopped.

While those areas are less populous than Iowa’s larger cities, they still have delegates up for grabs that could make the difference on caucus night in a close race. The Associated Press will call the winner of the Iowa caucuses based on the number of state delegate equivalents the candidates receive on caucus night.