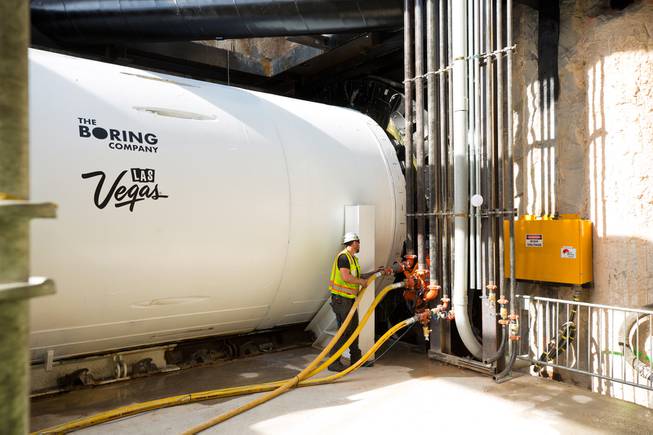 The Boring Company prepares to begin tunnel work for the Las Vegas Convention Center’s underground people mover project. The machine, which will bore an average of 100 feet a day, was receiving final adjustments before starting to dig on Friday Nov. 15, 2019. 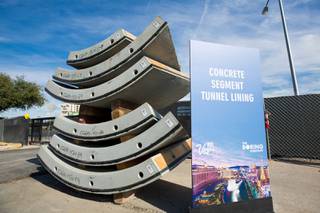 Work on the first of two “people mover” tunnels being dug as part of the Las Vegas Convention Center’s expansion project is nearly complete.

Las Vegas Convention and Visitors Authority officials said work on the first tunnel, which is nearly a mile long, will likely finish this week.

Once the first tunnel is finished, the machine being used by the Boring Company will be lifted out of the ground at the far west end of the convention center campus and trucked back to the original starting point outside South Hall.

The machine will then begin to dig a second parallel tunnel.

The people mover, which will take meetings attendees from one side of the convention center’s 200-acre campus to the other, is part of a $1.5 billion renovation and expansion project.

Steve Hill, the authority’s CEO, said the Boring Company is tunneling 85 to 100 feet a day.

“The Boring Company has picked up speed from the first month of operation, as well as smoothed out that operation,” Hill said. “They’ll use the same boring machine for the second tunnel, and that will probably be the last time that machine is used. They are working on a machine that is significantly faster than the one they have now.”

Hill said the most difficult part left for the tunneling project will likely be completion of the only station out of three that will be underground.

That’s because the underground station will need to be built during a period between two conventions that will be using the parking lot above it.

“That will be the most time-constrained part of the process,” Hill said.

Work is expected to begin on the station following the RECon real estate show — one of the best attended conferences in Las Vegas — in May.

Will America vote its pocketbook in 2020?

Zirándaro, Guerrero: Due To CJNG and LFM Violence Thousands of Residents Have Been Displaced

Narcos: Mexico review: a show for people who want the drug war to last forever – The Verge

Culiacán, Sinaloa: A Man is Killed on Boulevard Ciudades Hermanas