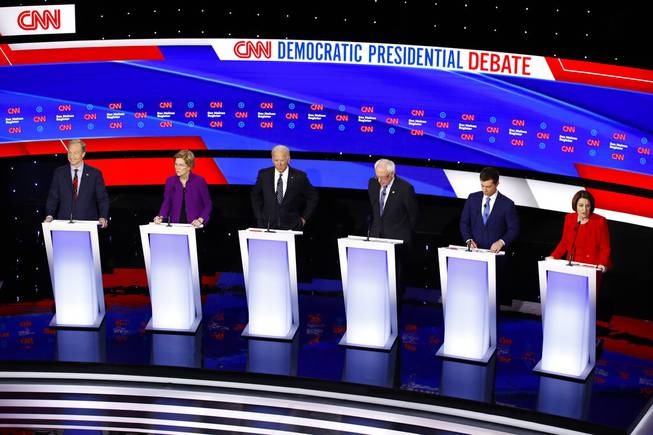 • Place: Visit nvdems.com/2020-caucus and type in your address to find your caucus day site.

Nevada is the third state to participate, behind Iowa and New Hampshire, but the first that resembles the nation overall in terms of ethnic diversity. At 29% Latino, 10% black and 10% Asian American or Pacific Islander, Nevada reflects the makeup of the national electorate far more than Iowa or New Hampshire, whose populations are 85% and 90% white, respectively.

This is a key reason it’s critical for Nevada Democrats to caucus this year. The February 22 contest stands to identify the candidate with a good chance of capturing across-the-board support and emerging to take on Donald Trump.

How to turn caucus day into true celebration

• The voting booth doesn’t hold a candle to caucusing. It’s like the difference between streaming television home alone and going to a movie theater on opening night. It’s a communal event, and is best fully experienced as such. But how to make the most of the newish Nevada tradition? Turn your political party into a real rager with these fun tips:

• Meet your friends for a bipartisan breakfast to discuss the issues. But don’t get into any serious fights, because it’s gonna be a long day.

• Pregame with shots of espresso, because, unlike most other Vegas happenings, you’ll wanna be sober for the main event.

• Bring a bag of fun-size candy bars to the caucuses to keep your energy up and the sugar high going. Bonus points if you share them with your newfound friends.

• Invite your friends—new and old—to meet up in the evening for a recap at the nearest locals bar. You’ll have a lot to talk about, and you can finally lubricate those policy disputes with booze.

For Nevadans, this isn’t just a matter of being a good citizen. The stakes are nothing less than the nation’s democracy, the global climate and the safety and well-being of both American citizens and the outsiders seeking refuge in our nation.

Emerging from his impeachment trial, Trump has little to deter him from pursuing his ambitions to gain dictatorial power. Senate Republicans, in embracing attorney Alan Dershowitz’s chilling argument that Trump could widely abuse his authority in the name of acting in the national interest, opened the door wide for him to wreck the system of checks and balances.

Meanwhile, another Trump term would be disastrous for the planet amid his ongoing dismantling of environmental regulations and the accelerating pace of global warming. And here at home, untold numbers of people of color and disadvantaged Americans will suffer due to Trump policies on the economy, health care and immigration.

Amid this destruction, the nation needs Nevada. Here, voters have proven that our state is the place where the extremist politics that led to Trump’s election go to die.

We supported ballot measures to enhance gun safety and promote clean energy, while rejecting candidates who wrapped themselves in the National Rifle Association’s flag and denied climate change. We backed both Democratic and Republican leaders who protected the Affordable Care Act and supported efforts to expand voting access, while other states cut access to health care and engaged in all manner of voter suppression activities.

We tend not to focus on candidates’ gender, ethnicity, sexual orientation or party affiliation, but rather on whether we think they can build consensus and craft policies that serve the interests of those they serve—not just their parties and core supporters.

In short, Nevadans are good at choosing leaders who reject extremist party dogma and work to overcome the polarization that Trump and his abettors would only intensify.

That’s another reason it’s critical for Nevada Democrats to caucus this year. The nation deserves the type of effective, responsible leader we’re so good at identifying.

So here’s hoping the Nevada caucus crowds are robust and diverse, including in ages.

For young voters, especially, participation is critical. They’re the ones who’ll be living in a nation and world made increasingly chaotic, volatile and at-risk due to the actions of older generations. Younger voters deserve a loud say in choosing today’s leaders, and they have one thanks to their numbers—Generation Z is the largest in the U.S.—and their increasing political mobilization behind such issues as gun violence and climate change.

They must not waste that voice. This is the time for those voters not just to speak but to roar.

As always, there will be naysayers on the sidelines trying to dissuade voters from caucusing. They’ll complain that the caucus process needs to be modernized or junked, and they’ll point to the fiasco in Iowa as proof of their point.

But they’re not worth listening to. Not ever, and especially not this year.

Yes, things went badly in Iowa, but the Nevada Democratic Party took lessons from the failures there and has worked to prevent such problems in our caucuses.

But the bigger picture is this: Faced with the most undemocratic and un-American president in U.S. history, it’s as important as ever for Nevadans to take a stand for the nation by voting at every opportunity. The caucus is our first opportunity in 2020 to do that.

Extradited to the U.S.: CJNG Background and indictment of El Menchito, the son of El Mencho leader of CJNG

Tirso Martinez Sanchez: Another sweet deal cut for ratting on El Chapo…..May be out in 1 year

Tijuana: Former Ministerial is executed in restaurant; in 2008 was linked to El Teo

Walls, mud packs and monkey removal for Trump in India