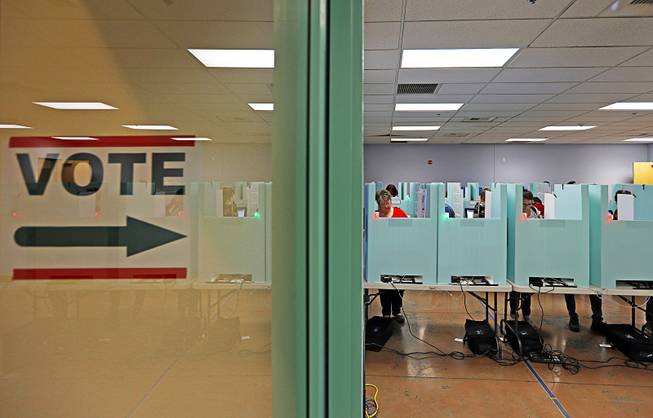 People vote during the 2018 midterm elections at a polling place in Las Vegas. Beginning Saturday, Feb. 15, 2020, registered Democrats across Nevada will be able to participate in early voting for the Nevada presidential nominating caucuses. It’s the first time in U.S. history that an early voting option has been incorporated into the caucus process.

A four-day early voting period begins Saturday for registered Nevada Democrats who can’t or don’t want to attend their party’s nominating caucuses next weekend across the Silver State.

It will mark the first time in the history of presidential nominating caucuses in the U.S. that an early voting option has been offered, and Nevada Democratic officials are intent on avoiding any sort of comparison to the beleaguered Iowa Democratic Party after problems with its first-in-the-nation caucuses this month delayed the reporting of final results for days.

“From the beginning, NV Dems’ priority has been to execute the most accessible, expansive and transparent caucus yet,” Nevada Democratic Party executive director Alana Mounce said in an early voting memo, adding that the party had “simplified the voting process and built in additional redundancies to streamline information and to ensure we minimize errors.”

Early voting in the Nevada caucuses is a change that stemmed from the Democratic National Committee’s demands for more accessibility in the oftentimes lengthy and wonky caucusing process. When the state Democratic Party announced in October that the Nevada presidential caucuses would include early voting, state chairman William McCurdy said the option “involves giving voters every opportunity to make their voice heard, and doing so in a way that is most convenient by including locations that have become a staple in their community.”

The party recently released a walkthrough of how early voting will work, outlining a paper ballot-based process that incorporates multiple security measures they say will keep the results secure.

Here’s what participating Democrats need to know before they head out to vote early.

There are more than 80 sites throughout the state in which Nevada Democrats can vote early during the period that lasts from Saturday through Tuesday. Every county will have at least one early voting site. In counties with multiple sites, voters can use any of those venues. Hours at the sites vary.

“Our sites are unique and so we wanted to ensure the sites … had the capability to stay open as long as possible,” said Molly Forgey, a spokeswoman for the state Democratic Party.

She said the hours were determined by what the individual sites could handle or were willing to host.

Voter registration and the ability for voters to change their party affiliation to participate in the nominating process will be available at the early voting sites, and an ID is not required to cast a ballot.

Upon arrival at a site, voters will check in. A volunteer will provide them with a voter card containing a pre-generated PIN and their unique ID number from the Nevada secretary of state’s office. This latter number will enable party officials to connect the early voter results to the voter’s home precinct to be counted on Caucus Day.

Voters will also enter the information on the voter card into a Google form as an additional method for the state party to “track participants and streamline data connection” in near real time.

This form and the check-in are designed to make sure nobody votes more than once. If a voter casts an early ballot and then tries to caucus next weekend, that will raise a flag.

Voters will cast their ballots on paper. They will be allowed to pick three to five candidates in their order of preference. These preferences will be used if the voter’s top selections don’t reach viability, or 15% of all votes during next week’s caucuses. For example, if a voter picks Sen. Elizabeth Warren, D-Mass., first and Sen. Bernie Sanders, I-Vt., second, the vote would go to Sanders if Warren doesn’t meet the viability threshold in that voter’s precinct.

At the end of each day, ballots cast will be put into boxes and transported to hubs monitored by the party. There, the ballots will be scanned and results tabulated.

According to the memo, “a clear chain of custody” will be documented from the voting site to the processing center to prevent any tampering.

Campaigns and observers will be allowed at early vote sites to “ensure the integrity of the process.” Campaigns will also receive data on who has voted early, but no presidential preferences will be shared until the caucuses start Feb. 22.

Unlike at the actual caucuses, however, where campaigns and supporters are allowed to jockey for votes, campaigns cannot electioneer within 100 feet of early voting sites. They can, however, have one observer at each voting site.

As far as turnout goes, Forgey said it would be difficult to make any guesses because of the novelty of early voting.

“It’s so hard for us to make a projection, just because we’ve never done early voting for a caucus before,” Forgey said.

Staffers for multiple Democratic presidential campaigns, speaking on the condition of anonymity, have raised questions about the process. Some said they were worried about how the integration of early votes into the caucus day results would play out; others wondered how early votes would get back to the correct precinct.

The campaign staffers said that despite their entreaties, state Democratic Party officials have not answered their questions.

Still, one staffer said the campaign had faith that the party was working hard on the process.

“Until we get some of the questions answered, then I don’t know we can fully 100% express confidence just yet, but at the same time we trust that they’re trying to do their very best,” the staffer said. “We’re all invested in this. We all want this to go as smoothly as possible, but there is the sense that the party should be a little more forthcoming about some things.”

Forgey, the state party spokesperson, pushed back on concerns about details and said that she was “not sure transparency can be an issue at this point.”

Extradited to the U.S.: CJNG Background and indictment of El Menchito, the son of El Mencho leader of CJNG

Tirso Martinez Sanchez: Another sweet deal cut for ratting on El Chapo…..May be out in 1 year

Tijuana: Former Ministerial is executed in restaurant; in 2008 was linked to El Teo

Walls, mud packs and monkey removal for Trump in India