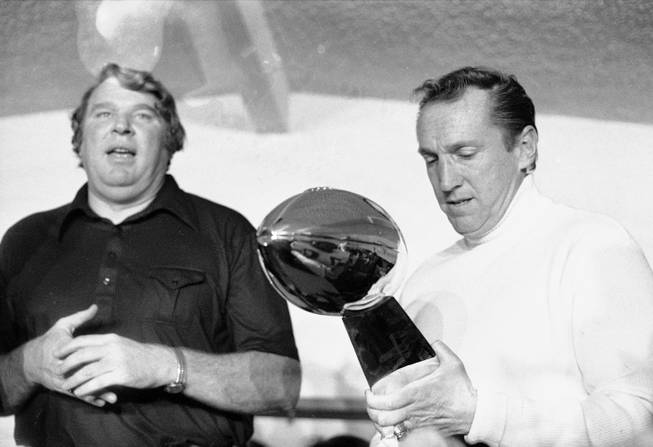 Coach John Madden, left, and owner Al Davis of the Oakland Raiders talk with reporters and display the Super Bowl game trophy on Jan. 9, 1977, in Pasadena, Calif., after their team beat the Minnesota Vikings 32-14.

The Raiders have one of the most storied histories in all of the NFL. Three Super Bowl championships, 26 members of the Pro Football Hall of Fame, plenty of memorable games and even more memorable characters.

Another chapter will begin Sunday when the Raiders play their initial game as the Las Vegas Raiders, on the road against the Carolina Panthers.

Many more significant happenings will surely follow. Here’s a look at some notable moments in the franchise’s existence:

Jan. 30, 1960: Oakland is awarded an American Football League franchise, soon to be named the Raiders.

With no home stadium secured in Oakland — which will become a bit of a recurring theme for the franchise — the Raiders play their first game at Candlestick Park in San Francisco.

1962: Al Davis is hired as the Raiders’ head coach and general manager at age 33. Yes, as hard as it may be to believe, Davis was once a young man.

1966: Davis leaves the Raiders to become commissioner of the AFL; when the league merges with the NFL a few months later, effectively eliminating the commissioner role, Davis returns as part-owner of the Oakland franchise.

1967: Under coach John Rauch, the Raiders win the AFL championship and earn a trip to Super Bowl II. The Green Bay Packers beat Oakland in the big game, 33-14.

1972: Through a series of shrewd (or underhanded, depending on your perspective) legal maneuvers, Davis wrests full operational control of the franchise.

Madden leads Oakland to the divisional round of the AFC playoffs, where it faces the Pittsburgh Steelers. The Raiders are poised to move on to the conference championship game after a late touchdown run by Kenny Stabler, but on a 4th-and-10 from their own 40-yard-line, the Steelers score a miracle TD on a pass that deflects into the hands of Franco Harris (snatched inches from the ground). The controversial play comes to be known as the Immaculate Reception and lights the embers of Davis’ longstanding paranoia regarding NFL officiating.

1974: The Raiders beat the Dolphins in the playoffs when running back Clarence Davis catches a wobbly, up-for-grabs pass in the end zone despite being surrounded by multiple Miami defenders. The Sea of Hands catch sends Oakland to the AFC title game, where they are defeated by the Steelers.

1976: After being eliminated by the Steelers in three of the previous four postseasons, the Raiders finally prevail over Pittsburgh in the AFC championship game to earn a berth in Super Bowl XI.

In the title game, the Raiders take an early 16-0 lead and cornerback Willie Brown turns in one of the most iconic plays in franchise history with a 75-yard interception return for a touchdown in the fourth quarter to seal the franchise’s first NFL championship. Some say Old Man Willie’s helmet is still wobbling around to this day …

1978: In a preseason game against New England, safety Jack Tatum delivers a hit that results in Patriots receiver Darryl Stingley being paralyzed for life. Tatum’s unapologetic, unsympathetic stance regarding the hit contributes to the “outlaw” persona of the Raiders franchise.

1980: Frustrated by an inability to secure upgrades to the team’s home, Alameda County Stadium, Davis begins the process of moving the Raiders to Los Angeles. The rest of the NFL owners unanimously vote to block the relocation, so Davis files an antitrust lawsuit against the league.

Davis trades away fan favorite Stabler, and new quarterback Dan Pastorini quickly suffers an injury early in the season. Veteran backup QB Jim Plunkett steps in and leads the team to Super Bowl XV, where he wins game MVP honors in a 27-10 triumph over the Philadelphia Eagles. Flores becomes the first minority head coach to win a Super Bowl.

1982: Davis wins his lawsuit against the league and the Oakland Raiders become the Los Angeles Raiders.

1983: In their second year in Los Angeles, the Raiders post a 12-4 record and advance to Super Bowl XVIII. Running back Marcus Allen rushes for 191 yards and two touchdowns in the title game, including a ridiculous 74-yard score in which he reverses field and outruns the entire Washington Redskins defense. Allen is named Super Bowl MVP.

1987: Davis uses a seventh-round draft pick (No. 183 overall) on former Auburn running back Bo Jackson, who had turned down a $7.6 million contract from the Tampa Bay Buccaneers the year before in order to concentrate on his pro baseball career. Davis persuades Jackson to play both sports, however, and the Heisman Trophy winner makes his Raiders debut midway through the 1987 season. In a Week 12 appearance on Monday Night Football, Jackson captures the imagination of football fans everywhere by running over — no, bulldozing — Seattle linebacker Brian Bosworth on a short touchdown run.

1990: Tired of sharing the L.A. Coliseum with the USC Trojans, Davis begins talks with Oakland to re-relocate the Raiders back to the Bay Area. The talks ultimately fall through and the team stays in Los Angeles.

The Raiders post a 12-4 record, but Jackson suffers a career-ending hip injury in a playoff win against Cincinnati. The team is defeated in the AFC Championship game at Buffalo.

1995: Unable to finalize a deal to build a new stadium in Los Angeles, Davis announces his intentions to move the Raiders back to Oakland. NFL owners back the move and the team relocates for the 1995 season.

1996: The Raiders lead the league in penalties for the fourth consecutive season.

1998: After going 19-29 in the first three seasons back in Oakland, Davis hires Jon Gruden as head coach. The 34-year-old installs his version of the West Coast offense.

2000: With journeyman quarterback Rich Gannon operating Gruden’s playbook, the Raiders go 12-4 and advance to the AFC Championship game. Baltimore defensive lineman Tony Siragusa flattens Gannon in the first half — a hit for which he is later fined $10,000 — and Oakland fails to score a touchdown in a 16-3 loss.

2001: Remember how Davis believed the NFL officials were out to get him? Well … holding a late lead in the divisional round of the playoffs at snowy New England, the Raiders appear to clinch a win when Charles Woodson forces a fumble from Patriots quarterback Tom Brady on the final drive of regulation. Upon further review, however, the referees cite the “tuck rule” and deem the play an incomplete pass. Retaining possession and given a second chance, Brady leads the Patriots to an overtime win.

2002: With Gruden and Davis at odds, the owner works out a deal that allows the coach to go to Tampa Bay in exchange for two of the Buccaneers’ first-round draft picks, two second-round picks and $8 million. Davis then elevates offensive coordinator Bill Callahan to head coach.

Working in Callahan’s pass-happy offense, Gannon enjoys a career year and earns NFL MVP honors. The Raiders advance to Super Bowl XXXVII, where they face … Gruden and the Buccaneers. It turns out to be a terrible day for the Raiders, as Gruden thoroughly outcoaches his former assistant and leads Tampa Bay to a 48-21 win.

2007: After being blown out by Gruden in the Super Bowl, the Raiders go into a seasons-long tailspin that culminates in Davis choosing LSU quarterback Jamarcus Russell with the No. 1 overall pick in the 2007 draft. Russell is a colossal bust and never lives up to the hype, setting the franchise back years.

The next day, the Raiders play at Houston, and Michael Huff intercepts Matt Schaub in the end zone to preserve a 25-20 victory. The Raiders defense had just 10 men on the field for the play, and coaches, players and media members say Davis was the 11th.

Still, the Raiders are flagged for 163 penalties, the most by a team in a single season in NFL history, and finish the season 8-8, missing the playoffs.

2015: Having taken control of the team, Mark Davis (son of Al) begins having the same issues with the Oakland Stadium as his father. He embarks on a very public scouting tour of San Antonio with the idea of possibly moving the team again, but decides to stay in the Bay Area.

2016: An ESPN profile of Mark Davis reveals that he wears the same outfit every day, drives a 1997 Dodge minivan, eats and works at the same PF Chang’s every day, and travels hundreds of miles to the same barber in Palm Desert to get his signature bowl cut. The piece effectively makes him a cult hero to Raider fans.

Led by third-year quarterback Derek Carr, the Raiders go 12-4 and make the playoffs for the first time since their Super Bowl loss in 2002. In a stroke of misfortune, Carr is injured in the penultimate game of the regular season and is unavailable for the playoffs. The Raiders lose in the first round.

Mark Davis meets with Las Vegas officials to discuss the possibility of public funding for construction of a brand-new football venue. The deal would redirect $750 million from room taxes toward a $1.9 billion domed stadium; state and city legislatures approve the plan and Davis announces his intention to move the Raiders to Las Vegas.

2017: NFL owners vote 31-1 in favor of the Raiders’ relocation to Las Vegas. Six months later, ground breaks on the project with a target completion date of summer 2020.

2018: Mark Davis lures Gruden out of the broadcasting booth by giving him a 10-year, $100 million contract to return as the Raiders’ head coach.

2020: The Raiders move into their new headquarters in Henderson.

The team holds its first practice at recently finished Allegiant Stadium. Davis gives the team a pep talk before the session. “Welcome to the Death Star,” he says.

‘The Amazing Race’s Phil Keoghan On What To Expect As A Contestant: ‘You Just Never Know What You’re Going To Do’

‘The Amazing Race’s Phil Keoghan On What To Expect As A Contestant: ‘You Just Never Know What You’re Going To Do’

Japan researchers show masks do block coronavirus, but not perfectly