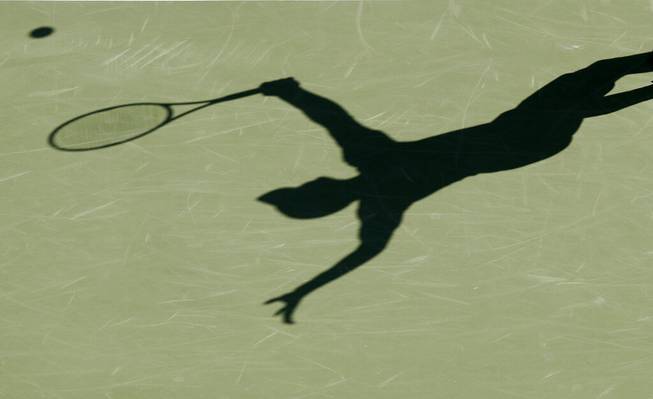 This is a 2017 file photo showing the shadow of a tennis player.

The group charged with monitoring gambling and punishing corruption in tennis found a near-doubling in the number of suspect matches during the first three months of 2020 — an increase it tied to the coronavirus pandemic.

The London-based Tennis Integrity Unit (TIU) issued its quarterly report Wednesday and said it received a total of 38 alerts from the regulated betting industry about matches on lower-level tours from the start of the year through March 22. That is up from 21 alerts in the same period of 2019.

The 38 match alerts in the year’s first quarter break down this way: six from the ATP Challenger Tour, and 16 apiece from the men’s and women’s International Tennis Federation World Tennis Tours.

An alert means unusual betting patterns were noticed but does not necessarily indicate there was match-fixing. It does trigger an assessment, and possibly a full investigation, by the TIU.

Wednesday’s TIU report concluded the jump in cases “is an indication that the entry levels of professional tennis were deliberately targeted by corruptors, as the sport moved towards suspension due to the” outbreak of COVID-19.

Like most other sports, tennis has been affected by the pandemic.

The All England Club canceled Wimbledon for the first time since World War II and all pro tennis tours have been put on hold at least until mid-July.

Contingency plans are being considered for when — and if — the tours can return to action in 2020.

The TIU went on to say that “in anticipation of heightened integrity concerns when tennis resumes,” it is working in conjunction with the various governing bodies of tennis to come up with “an education and awareness campaign to inform and support players, officials and tournament staff.”

Tournaments started getting called off in early March because of the spread of the new coronavirus, which has infected more than 1.4 million people worldwide, while more than 80,000 have died, according to Johns Hopkins University. The true numbers are almost certainly much higher, because of limited testing, different rules for counting the dead and deliberate underreporting by some governments.

For most, the virus causes mild to moderate symptoms such as fever and cough. But for some older adults and the infirm, it can cause pneumonia and death.

Jerry O’Connell On ‘Haircut Night In America’: ‘It Just Made Us Laugh’

‘United We Sing: A GRAMMY Salute To The Unsung Heroes’ Coming To CBS on June 21st

Jerry O’Connell On ‘Haircut Night In America’: ‘It Just Made Us Laugh’

‘United We Sing: A GRAMMY Salute To The Unsung Heroes’ Coming To CBS on June 21st

‘I Hope It Resonates With People’: Jesus Trejo On Showtime Comedy Special ‘Stay At Home Son’

740 Kilos Of Meth Found among Corn Bags in Chihuahua

Michoacán: CJNG says report of truce with Carteles Unidos is a lie, shares image of El Abuelo Farías in a hospital

Francisco Navarrete, alleged leader of the CJNG in Tierra Blanca, is assassinated

Backlash against Trump exiting WHO as COVID-19 grips Latin America

‘I cannot move the lessons online’: Educators in remote Indonesia visit students one by one during school closure