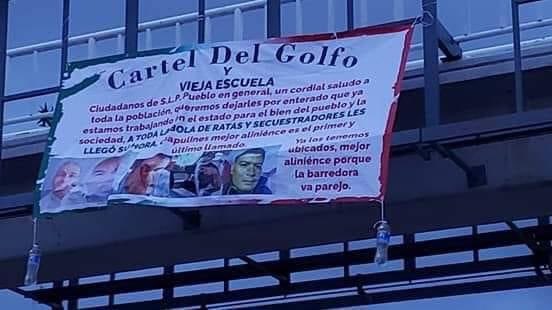 By 9AM there were the bodies of 3 murdered men, and a least 5 narco-messages discovered early today in  San Luis Potosí.   By  9 o’clock, the bodies and the narco messages were discovered in different parts of the state.
A few meters from the office of the PAN mayor of the capital, Xavier Nava Palacios, the bodies of two men were tied hand and foot, with visible signs of torture, with a plastic bag covering their heads and torsos.
Although municipal police officers sought to prevent journalists from taking photographs and video of the discovery, the news spread to the media, who spread the news.
Later, in the Juan Pablo II neighborhood, a man died from gunshots.

at overpasses of the Río Santiago, Periférico and El Aguaje, Periférico and Prados, appeared narcomantas attributed to the Gulf Cartel, in which they warn that they started a  cleaning and send a warning to  “the filthy rats and kidnappers”, that  their time has come. ” These messages also appeared in the municipalities of Charcas and Cerritos.

Who are the children of Rafael Caro Quintero?

The Ongoing Saga in the Emerald Triangle, Nor Cal

‘It Is A Binge-Worthy Show’: Hermione Corfield On Showtime’s ‘We Hunt Together’

The Ultimate Guide To Picking A Ripe Watermelon

Who are the children of Rafael Caro Quintero?

The Ongoing Saga in the Emerald Triangle, Nor Cal

China imposes sanctions against US lawmakers over Hong Kong